Inform 7 is a new but already widely used interactive fiction language, but also the IDE which has been developed in tandem with this language. (It is not the now version of Inform 6, which it hardly even resembles. The name is a bit confusing.) In terms of writing interactive fiction, Inform 7 is probably the most important application, so it is a top priority for IF on the Linux desktop. 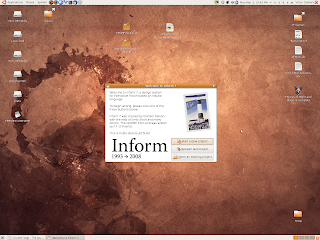 When Inform 7 came out, there were a Windows and a Mac OS X version, but no Linux version. (I wrote Fate on Windows.) Today, however, there is a Linux version, thanks to P. F. Chimento; it is written to integrate well with Gnome, and is available as a .rpm for Fedora 10 and as a .deb for Ubuntu 8.10. These packages will presumably also install on other version of Fedora/Ubuntu and on other distributions that use either .rpm or .deb. You can also try to compile new packages from source, which is available from SourceForge.

Finally, there is a command line version of the interpreter available for various hardware architectures, thanks to Adam Thornton--but I won't be talking about that. 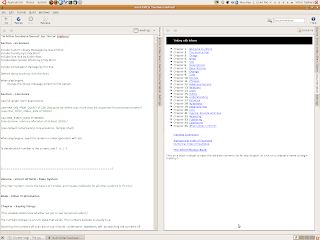 (The only way to make installation easier would be to get Inform 7 accepted into the official repositories of the major Linux distribution. But since the compiler is not free software, I don't see this happening--which is a shame.)

Linux Inform 7 has almost everything that the Windows and OS X versions have: a source window with syntax highlighting, a fully functional index, the ability to compile and play the game within the IDE, and so on. As far as I know, only three things are missing:

1. "Blessing" a part of the skein so you can check whether your transcript changes as you change your code. I never used this in the Windows version, so I don't miss it.
2. You can only play one game at a time within the IDE. If you are working on several projects, you must stop one game before you can play the other. This too is only a minor annoyance.
3. The current interpreter doesn't support Unicode (it is an older version of Gargoyle), which means that it cannot handle indexed text. This is a major annoyance, but I have heard that it will be solved in the next release of Inform 7.

All in all, the functionality of Inform 7 under Linux i 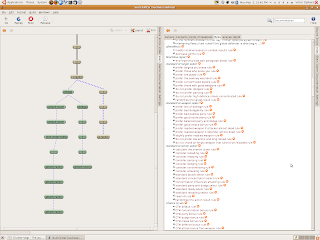 s good, and chances are that it will soon improve to very good.

Using Inform 7 under Linux is a good experience, which will probably become even better soon.

Does anyone know a way to add screenshots to a blogger post that is not a pain to use?)

Popular posts from this blog

Keeping the narrative pressure on

- September 04, 2020
I played another session of Trollbabe yesterday, and I would like to take the opportunity to write a little bit about GMing this game (and similar narrativist games). This is not a worked out manifesto so much as an attempt to think through an approach that I've been taking more or less instinctively. First, some context. This game was online, with two people I had never played with before: Judith and Katy. Actually, it's not quite true that I never played with Judith. I've known her for some 38 years, and possibly the first roleplaying I was ever engaged in was on a vacation with her family and my family. She acted as a kind of story guide, and I and her brother Adriaan played characters in an unfolding short story. I was thrilled by the possibilities inherent in such an activity, but it would take more time before I really discovered the world of tabletop RPGs. Both Judith and Katy played a bunch of roleplaying games before, though as far as I can judge they were all fai
Read more

Thoughts on a Trollbabe session

- August 28, 2020
Yesterday, I played a second session of Trollbabe with Erik and Michiel, even more delightful than the first. ( Trollbabe . I dislike the title of the game, to be frank, but it's the only thing about it to dislike. Let me stress that the whole point of the game is that you're playing strong, independent women. With horns.) To give you an impression of the context, let me say that both Erik and Michiel are very good friends of mine, and that we've done a fair amount of roleplaying before, though mostly D&D. In fact, the two of them have played various editions of D&D almost exclusively, and neither had any previous GMing experience. That was about to change. In the first session, I GMed their characters Rolda (Michiel) and Vekir (Erik), who were together in a single adventure -- something that is not a given in Trollbabe . This time, we were going to do the same thing, but in addition I would also get to play a character, one adventuring at a different location. Mi
Read more

Two new videos: introduction to IF, and "We know the devil"